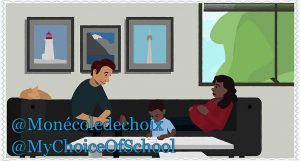 Watch the series My School of Choice

Students and pupils at FLE outside Quebec live and learn in French, while evolving in a predominantly English-speaking environment. In addition, English is taught from elementary school on, with the same curriculum as in English-language schools.

Students who receive a high-school diploma from a French-language school are proficient in both Canada’s official languages. They become perfectly bilingual citizens who throughout their lives remain comfortable in French and English.

This increases their chances of being admitted to the post-secondary education or training program of their choice, because they can apply to French-language, English-language or bilingual institutions.

French-language school graduates’ high-level of bilingualism, as well as their sense of belonging to the Francophone community while remaining active and involved in the greater Anglophone community, often leads to excellent professional development and access to highly promising career opportunities in either official language, in Canada and abroad.

The diversity that characterizes Canada’s Francophonie enriches the cultural environment in French-language schools, colleges and universities belonging to Canada’s FLE network.  In fact, immigration is a priority area in the Strategic Plan on French-language Education.